June 30th was round 4 of the Continental Sportscar Championship, where 26 cars competed for the top honors in GS (Grand Sport) category consisting of GT4 Homologated cars. #39 Carbahn/Peregrine Racing Audi R8 and team were looking forward to on track action after a lengthy break from their pace setting speed at Mid-Ohio a few months back. Round 4 marks the “summer swing” which covers 3 races in 3 weeks time.

“Watkins Glen is one of my favorite tracks in the US, if not my favorite.” Said Westphal. “We have been making progress on the handling of our Audi R8 and I am looking forward to the fast, flowing corners that make up the 3.5 Mile circuit.”

Carbahn #39 rolled off the truck with some instant pace, yet troubling mechanical hiccups forced the Audi to miss the grid before the start of the race, and thus moved Tyler McQuarrie to the back of the field for the start of the 4HR race. Even more serious, the Audi was caught in a position with nowhere to go and had contact on lap 1 which fortunately didn’t remove the car from competition, but it meant McQuarrie and Westphal would have to charge from the back.

One overheating limp mode and extra pitstop later, the Peregrine Racing Audi was making its second charge from the back of the field in 4 HRs at the hand of Westphal, who drove a stellar last double stint, putting the car back on the lead lap and charging up from 21st to 4th position. Most of those spots 12th-4th were gained in the last 35 minutes after a yellow neutralized the field for a sprint to the finish.

“What a fun race, especially hot today with ambient in the mid 90’s making the car well over 100 degrees inside, but I was enjoying all the battles I had so it was easy to forget about how hot it was. The final sprint was basically passing one car per lap for the last 30 mins on track, and I made an attempt for 3rd but ran out of room and lost some time in turn 7 with 2 laps to go. These are the types of races that I will remember for some time.” Explained Westphal. “I cant thank my Carbahn/Peregrine Racing Team enough for all the countless hours and nights of hard work in prep for this event, they are the real MVP’s making this whole event possible. I would also like to thank Audi for building such a strong car. The amount of contact we had this race surely would’ve hurt other cars much more than our, so hat’s off to them for building a durable racecar.” Said the Californian.

Carbahn Peregrine Racing will race at Canadian Tire Motorsports park for round 5 of the 10 race championship this week, July 7th, 2018. You can follow the race live at Imsa.com to root for the #39 Audi, Westphal, Mcquarrie and Carbahn this weekend.

Thanks to our partners:
TNVC Inc.
Hammer Nutrition 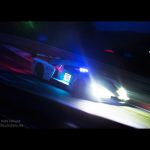 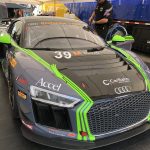