For Immediate Release-
The Nurburgring 24Hr race is known for a few things;

Jeff Westphal at the helm of his #704 SCG003c GT3 Car shocked the largetst Auto makers in motorsport (Audi, Mercedes AMG, Bentley, BMW, Porsche, Nissan, Toyota, Ferrari and Lamborghini) by qualifying his SCG003c first, ahead of 40 GT3 cars driven by some of the best drivers in the world. The #704 SCG003c, owned by American: Chris Ruud, and designed by American: Jim Glickenhaus was the brain child of Mr. Glickenhaus and Traum Motorsport, the vision to create a race car (and eventually a road car) worthy of being called the beating the best in the world, and this result did exactly that. This would mark the 45th running of the 24 Hours of Nurburgring, in which only 2 non germans have ever qualified 1st, Jeff being the first American to do so.

The Nurburging is synonymous with car enthusiasts as a place to benchmark the performance of their favorite sports car, however there has been much debate over the laptimes produced by many road going sports cars due to inconsistencies with timing loops, weather, tires, etc. Jim Glickenhaus set out last year (2016) to develop a trophy awarded to the car fastest around the old track, the one used by modern oem’s and enthusiasts alike, with the trophy being returned each year to the new winner.   Westphal brought that trophy home to SCG by being the quickest around the famed “old loop” at 6’33’22, some 19 seconds quicker than Lamorghini’s newest record setting Huracan Performante, and 10 seconds a lap faster than Mclaren’s P1 GTR. Some will contest that SCG was driven in racecar trim, however the GT3 is limited to 500hp whereas the road version will make nearly 800hp.

Westphal is no stranger to “the ring”, as it’s affectionately called by racers and fans alike, as he’s been along for all the development of the SCG003c since it’s inception back in 2015. “I want to thank Traum Motorsport for designing such a potent weapon, to be able to compete against the big manufactures pound for pound in a scant 2.5 years of competition, that’s a huge accomplishment. I also want to thank Jim and Chris, for “keeping the faith” as they call it. We couldn’t have done this without their relentless support!” said Westphal “I am over the moon with the result, as it’s a joy to secure this result for everyone involved. Being the first American to win pole, as well as the second non German in 45 years, It’s an incredible feeling. Dunlop was a huge help for us in this accomplishment as well, providing us with competitive rubber in which we can refine our car around.” Explained the Californian.

Jeff gets to add, fastest American, and first ever to claim pole position to his ever growing and impressive resume, which will accompany his championship wins, race wins, track records and podiums in both European and the American continents. 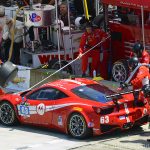 Westphal with fastest laps on both European and American continentsFinishes 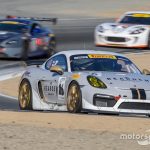