June 8-13 the 46th running of the Nurburgring 24hr commenced in the Eifel Mountains of West Germany. A race in which the top GT3 manufacturers meet on a world stage at the hardest circuit this globe has to offer. Nurburgring, 15+ miles of windy, blind, mountain laid racetrack is synonymous with car folk alike as being the driving mecca, and once a year 150+ cars meet for a twice around the clock endurace battle.

SCG (Scuderia Cameron Glickenhaus) hired Jeff Westphal to compete in the endurance event this May, 2018. Westphal, no stranger to Nurburgring or the SCG003, being one of the factory pilots who has been involved with the development of the car since its inception in late 2015 was on hand with 3 other SCG factory drivers to attempt to show the world that the small, firm designed privateer entry can best that of the big auto manufacturers, Aston Martin, , Audi, BMW, Ferrari, Lamborghini, Mercedes AMG, Porsche and Renault.

The weekend saw SCG003 #705 struggle to make pace in qualifying due to a regulation change that took power away from the car. SCG wasn’t alone, as Audi and BMW both were off pace compared to the rivals. However a post qualifying, pre race Balance of Performance (BOP) change gave all 3 manufacturers some more speed heading into the 24HR event. SCG at the hands of Andreas Simonsen, qualified 27th of 150+ cars in the top 30 session that Westphal set the pole position for in the 2017 event, and during the first 4 hours of the race, had worked its way inside the top 10. 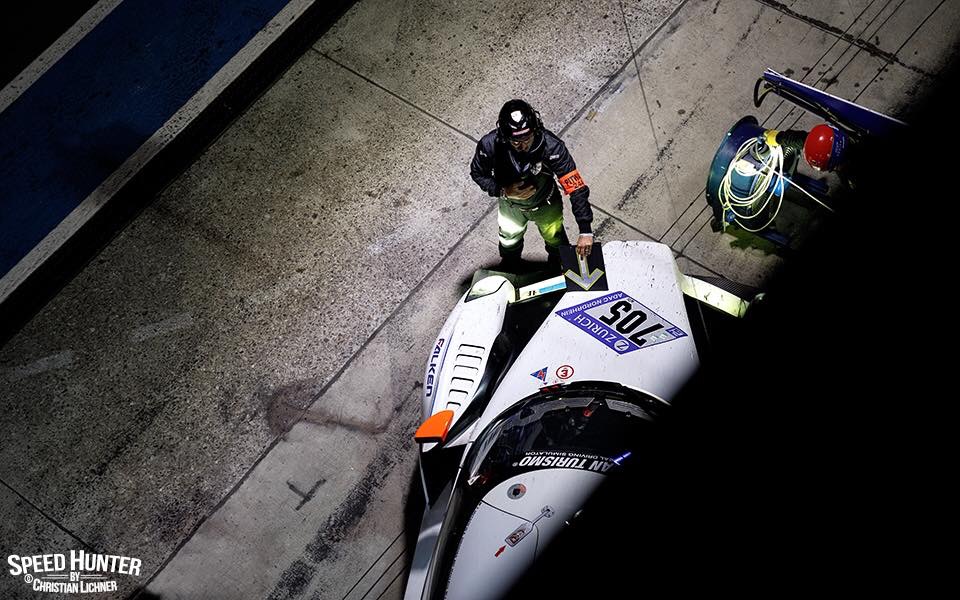 “The BOP change was necessary as our car was built specifically to take advantage of the long straight away during the lap with low drag, meaning we have a higher top speed than most of our competitors. The lap that is over 8 minutes long renders the single straightaway only a portion of the lap, yet it’s an important one for us.” Explained Westphal whom was unhappy with the initial weight, power, restrictions the car had been given. “Some conversations with the race director were had and they agreed that the changes suggested internally by a party were too severe, so the race director adjusted the requirements for our car and helped us close a 6 second per lap deficit to the leader before the race started” said Jeff. This change would ultimately be the key to the competitiveness of the #705 car at the Ring for the 24.

“My first stint went okay, not quite as precise as I would like, however I was working on 2 laps of practice before my first race laps. Not ideal, but sometimes you sacrifice personal needs for that of the team in which testing and break in periods needed to be executed to have a healthy car for the full 24hrs. I was able to set the fastest race lap of the car in both that stint, and my second stint, so clearly the many laps I have done there are ingrained in my sub conscious and I handed the car over to my team mate in 4th place.” Described the Californian.

Stint 1 and 2 were in the dry, however stint 3 would have Westphal driving in the rain around the 15.3 mile circuit.   Heavy rain hit the track during hour 13-16 and then paused until a deluge came from hour 18-24, which ultimately caused a red flag (halt of the race) due to conditions being unsafe for the medical helicopter to take off. During the rain, all of the drivers had some incident that involved being off track, yet most of the competitors shared in that achievement as well. Roughly 4 top cars crashed violently, ending their race, where as the SCG could continue. Westphal found a puddle in one of the 170 corners that ultimately sent his SCG003 careening off track into the metal railing 20 yards from the tracks edge. “As soon as I turned the wheel I was backward, which to me is a hydroplane symptom as I was experiencing a lot of hydroplaning on the back straightaway at 160 mph. Luckily I was able to straighten the wheel once I knew all was lost so when the car bounced off the barrier, the alignment and steering rack were still intact. I was able to drive away from the spin with minor fender damage to the car, but it’s something I am not happy about. Being quick is always a goal of mine, but bringing the car in safely is another goal I treat very seriously. Although I wasn’t alone in this scenario, I still am disappointed we even had to experience it. However our Dunlop Rain tires were not very gippy in the wet, causing us to not only loose 30=35 seconds a lap to the Michelin car, but also be taking big risks to be 30 seconds off. For an endurance race, this is something you don’t want to have to do.” Said Jeff

It was when the rain came that the SCG003 fell out of the top 10, with other Dunlop laden cars and the top spots resided with Michelin wrapped racecars. With the weather impacting the remainder of the race, SCG003 ended up winning the SP-X class, and finishing 19th overall. It was an improvement from the starting position, and a testament to the hard work of the team and the drivers involved.

Jeff Westphal Racing would like to thank all that made this event possible; 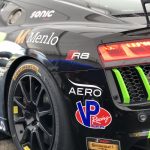 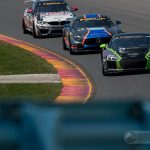