Round 7 of 10 in the Imsa Michelin Pilot Challenge was at historic Elkhart Lake, Wisconsin, known as Road America for Carbahn Motorsport with Peregrine Racing and their Championship leading #39 Audi R8 GT4 LMS.  Jeff Westphal and Tyler Mcquarrie were eager to continue their season long momentum in the sleek R8, and extend their lead in the championship against; Aston Martin, BMW, Chevrolet, Ford, Mclaren, Mercedes and Porsche.

“We knew this was going to be a challenging race for us, politically with BOP (balance of performance) the series changes the restrictions on certain models, and our R8 is great on the brakes, into and through the corners, however we lack a little bit of regulated straight line pace to some of the others, so Road America with long straights was a known challenge for us and our machine.  Typically we can do the lap time, but in traffic we have our work cut out for us.  It’s the reality of racing from the professional side that doesn’t get talked about much.” Explained Westphal.

Luckily, Carbahn is led by world famous (formerly BMW synonymous, Steve Dinan) chassis tuner, so the Audi R8 is extra sharp around the 4 mile circuit, which played into Carbahn with Peregrine Racing’s hand for the 2 hour race. Tyler Mcquarrie executed a flawless qualifying lap, which won the pole starting position for the 34 car field (1st place).  “Steve and the Peregrine guys worked tirelessly to provide an optimal car for the qualifying, so winning the pole position is the best way to say thank you to the team” said Mcquarrie.

Typical strategy is to have Mcquarrie qualify and start the #39 Audi, and hand over the R8 GT4 to Westphal for the dash to the finish as this format is multi driver, endurance racing.

Heavy rain came just before the start of the race, which left the tire choice (rain or dry) open to each team before the green flag.  Carbahn opted to gamble and stay on dry tires even though the entire circuit was covered in water.  This was a move that’s paid off twice before in the season, where the circuit dries one car width within 15 minutes, so the Carbahn team decided to start Mcquarrie on dries.  This proved to be a trial of Tyler’s patience, as most cars with wet tires were 9 seconds a lap faster, relegating Tyler to almost last place in 2 laps.  However by 20 minutes into the race, the track had dried significantly, and Mcquarrie with the advantage made his way back up to 2nd position before handing the car over to Westphal.  Jeff assumed the wheel of the R8 and rejoined the race further down the grid due to the pit stop time on dry tires, with rain intermittently starting to fall.

“The problem with races like this is there is no sure answer to calling the weather, the duration, and how it will affect the track.. At the moment, the weather showed a drizzle for 15 minutes, so I went out on dry’s expecting the track to improve for the finish of the race, however the storm changed and is quickly looked like we would have rain all the way until the checkered.  We pit 3 laps after I got in and switched to wets which proved to be the best move given the circumstances and our decision when I left pit lane.” Said Jeff.

The #39 Audi R8 GT4 rejoiined the race in the lower half of the pack, but with a short yellow flag coming out upon Westphal rejoining the race, he was behind many cars still on slicks as the rain began falling harder and harder.  At the restart, Westphal passed 7 cars in the first 4 corners of one lap on a soaked circuit.  Pushing the car forward, Westphal ultimately got back to 4th position in the short run time left after the restart to score valuable points, extend he and Tyler’s lead for the overall championship, and bring the car home clean for round 8 in 2.5 weeks at Virginia International raceway.

The #39 will compete in the 2hrs of Virginia International Raceway later this month of August in Alton, VA.  With 3 races to go, each round becomes more and more important in Carbahn Motorsport with Peregrine Racing’s quest to capture the overall championship for themselves and the manufacturer Audi.  Follow the R8 via: 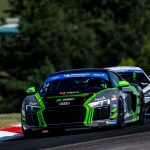 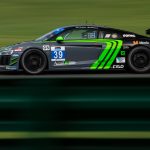