The 2020 racing season kicked off at Daytona International Speedway where Westphal would defend his championship title in the Michelin Pilot Challenge in the Carbahn with Peregrine Racing Audi R8 GT4 LMS in the 4 hour enduro.

“I am no stranger to double duty and the challenges that is poses for a driver, running between pre-briefings, driving the car, post briefing and heading across the paddock to the other program/team all day.  It’s sometimes quite difficult to eat lunch as I really need to be in two places at one time.”

Friday Jeff and Co-driver Tyler started the 4hr event from 2nd on the grid, and with a promising race running in the top 5 throughout the duo scored a 4th place finish to collect good points in the 10 race championship.

Saturday Westphal started his #63 Ferrari from 2nd on the grid, and spent most of his race in the top ten, while running in the top 3 the majority of the time.  The team would score a 7th place finish in the end, which didn’t reflect the effort put forth of all involved yet the Balance of Performance was such that the Ferrari didn’t have the straight line performance to compete with Porsche, BMW, Audi and Lamborghini this year.

All IMSA races are shown on NBC Sports 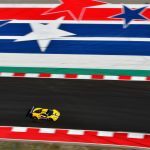 Blancpain GT America Round 1-2 Circuit of the AmericasFinishes