A Sebring 12HR Send Off

Scuderia Corsa with Westphal at the helm showed dominance over the GTD field and led much of the Mobil 1 Twelve Hours of Sebring presented by Advanced Auto Parts. Still, a late hit took the win away and handed a fourth place to the No. 63 WeatherTech Ferrari GT3 Evo 2020.

Driver Jeff Westphal had built a seven-second gap back to second place when a caution came out with 25 minutes remaining in the 12-hour race. With 17 minutes on the clock, the field took the green. The No. 74 Mercedes tried an unsportsmanlike move on Westphal and the GTLM leader, Connor Di Fillipi, which pushed both of the leaders off the track, allowing other cars to pass. The No. 74 received a drive-through penalty, but there was not enough time to regather the lead with mere minutes left on the clock.

The team walks away with second in the Michelin Endurance Championship as a consolation prize. Scuderia Corsa finished the 24 Hours of Daytona seventh, was nearing a fourth-place finish at the six-hour race before contact landed the team in ninth and for the second time, it won the Petit Le Mans.

The fourth-place finish, though inside the top five of an ultra-competitive field, was lackluster for the many challenges Scuderia Corsa overcame in 2020. 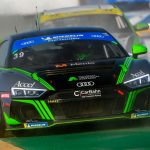 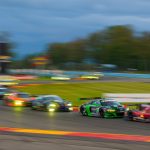